Proposed quarry is the pits

My adjournment is to the Minister for Planning and the action I seek of the Minister is to listen to the loud voice of the community and reject the disastrous planning application for a quarry that is set to gut the connecting communities of Beveridge and Wallan.

Wallan and Beveridge are fast-growing and thriving communities. More than 120,000 people are likely to call this area home in the next 20 years and the community has worked hard to plan its future to ensure there will be local services and amenities to make their community a great place to live.

I have received countless amounts of correspondence from concerned locals that the proposed quarry that was inserted into the Precinct Plan is going to be a stone’s throw from their homes, a couple of kilometres of the primary school and high school, and close to community and sporting centres.  Blasts could occur over a five-hour period from Monday to Friday for twenty years, disrupting residents right to peace and quiet, including shift workers, babies and young children, scaring their pets, creating dust, traffic and ruining their landscape.

People moving into the area have written to me completely bewildered that consideration would be given to a proposal that is so close to homes and will likely impact future access to services, shopping facilities, recreational areas and the aesthetic appeal of the community. They are also concerned about traffic congestion, with the Northern highway already under strain and the Hume Freeway the only realistic route for Beveridge to most other areas.  They have had no assurance that blasting from the quarry will not impact their health and wellbeing or lead to long-term structural damage.

A local wrote to me last week saying “it appears there is no regard for the future of the locals… there are many other areas where the same resources can be sourced, without the health and safety impacts to any existing community.”  They rightly noted that the time frame for the life of the quarry – some say 20 years, and others say 30 years, is not ‘temporary’ but inter-generational.

The Mitchell Shire council couldn’t have put it any better – a quarry in Beveridge/Wallan is the pits.  This community isn’t anti-quarry. They know that resources are a necessary part of building vital infrastructure – but a quarry in the middle of a residential precinct isn’t good planning or good practice.

It is set to stifle development and makes little economic sense except to the owner of Conundrum Holdings.

Council has opposed the quarry – in fact they have rejected the permit application twice – but they were nonetheless directed to draft permit conditions by the ministerial advisory committee for them to consider as part of their process. The Advisory Committee chair Nick Wimbush said it did not signify the quarry would be approved, but it is madness that consideration of this has come this far when everyone is saying no!

As I raised in my adjournment on this same issue back in December 2021, the original Precinct Structure Plan was exhibited publicly and approved without the inclusion of a quarry. 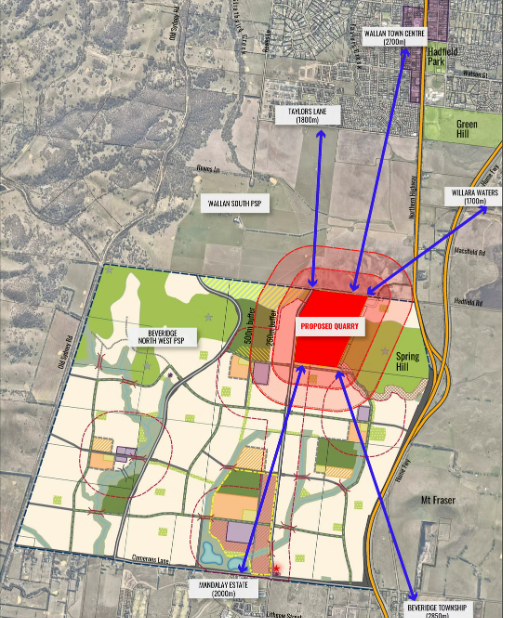